Even before COVID-19, ventilators were in short supply and overwhelmingly expensive. Now that demand for these live-saving machines has been exacerbated by the pandemic, the situation is even more dire. The conclusion is straightforward: as the virus spreads, the problem must be addressed, and quickly.

In March of 2020, Tyler Mantel launched The Ventilator Project in order to pursue a solution. Founded as a non-profit, TVP sought to take a different approach than mainstream commercial ventilator companies, knowing that an alternate route could be the best way to really make a rapid impact.

As the pandemic continued to disrupt and encumber traditional medical supply chains, the engineering team began sourcing as many materials as possible from outside  traditional economic channels. TVP was determined to address the ventilator shortage from the perspective of immediacy and efficiency.

During the initial design phase of the AIRA ventilator, a concept was drawn up while considering available materials. This was naturally one of the most difficult stages of the design process, but TVP persevered. On the very first day the engineering team assembled, they built their first prototype from hardware store parts—all to prove they could get positive air pressure.

After a few early breakthroughs in the design, the engineering team was able to accommodate the full range of FDA requirements for the device, supporting up to 800mL of oxygen delivered in less than 0.5 seconds. By mid-April, the team had developed a full system and new exterior that was able to meter out the proper amount of air to regulate the inhale and exhale of a patient’s breath.

As of May 1st, The Ventilator Project began testing the v6 prototype. By mid-May, development progressed to updates for the expiratory tract, alarm circuit and user interface system. The team introduced some design changes to improve both the device’s functionality and manufacturability, reducing the form factor by over 50% and optimizing the battery for the newer system. By May 22nd, TVP transitioned from internal to external testing with the help of Intertek, an international Quality Assurance facility.

External testing is the final stage before AIRA can be authorized by the FDA, an absolutely critical milestone that will allow the ventilator to be manufactured and distributed in the U.S.

The following images and descriptions paint a clearer picture of the steps involved in developing AIRA, as well as the details behind their conception. 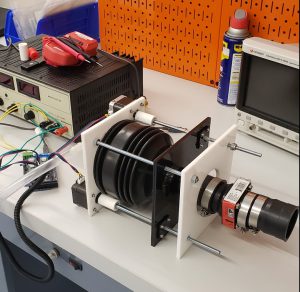 Stage 1 was the first iteration of The Ventilator Project’s design. Commonly known as ‘proof of concept’ in the engineering world, the simple yet productive design proved to the engineering team that positive pressure was possible through a bellow system, hence the utilization of minimalist pieces to move air with an outside air source.

More important than just a mechanical feat was the symbolic victory that came from Stage 1 succeeding – an acceptance letter of sorts into the program of designing a ventilator that could potentially reach the national and global market. 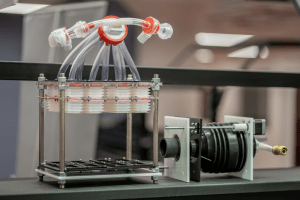 After the success of Stage 1, Stage 2 presented an immediate need for the engineering team to devise not just an inlet of air movement but also an outlet. What does this mean? With the bellow system, air intake was achieved, but an additional system was necessary to push air and achieve pressure for the system. Eclare lifters, used in pneumatic food processing, were introduced to tackle the issue. However, there were still issues with the degree of force being introduced to push air. 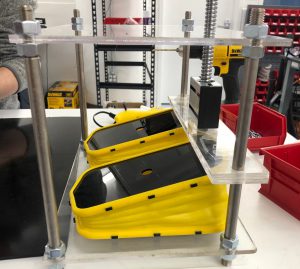 With resources at their most expensive and innovation in high demand, the engineering team came upon the realization that an alternative to conventional respiratory technology could be found right under their noses, albeit in an unexpected form: bellows from bee smokers. This unique thought process advanced the project to Stage 3—the point of reaching a reduced force to push air. The introduction of bellows allowed the team to push a higher volume of air faster. However, even during this success there was a minor roadblock: though the bellows moved air at the right pressure, the team was only hitting the low limits of pressure necessary – not the high limits. 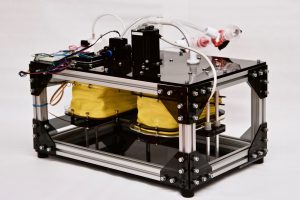 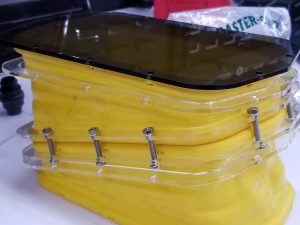 Stage 4 proved pivotal in the development of a high-capacity ventilator as the engineering team took the initiative to double the number of bee bellows by stacking them. While not only doubling the volume of air made available, this also met the 3 modes of control necessary for a COVID-19 ventilator to be successful: pressure control, volume control and pressure support.

So—what do these different modes mean?

Other modifications include a microcontroller which operated as the brain of the ventilator. Microcontrollers are very useful in that they are essentially miniature computers which execute commands given to the ventilator. These devices are cost-effective, small, and productive machinery.

This prototype model also was able to produce more air pressure than required by the Association for the Advancement of Medical Instrumentation, so the team modified the motor and drive system in response. 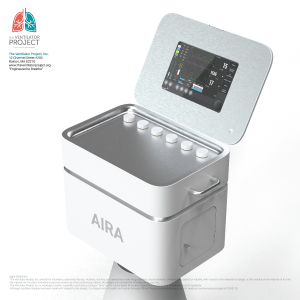 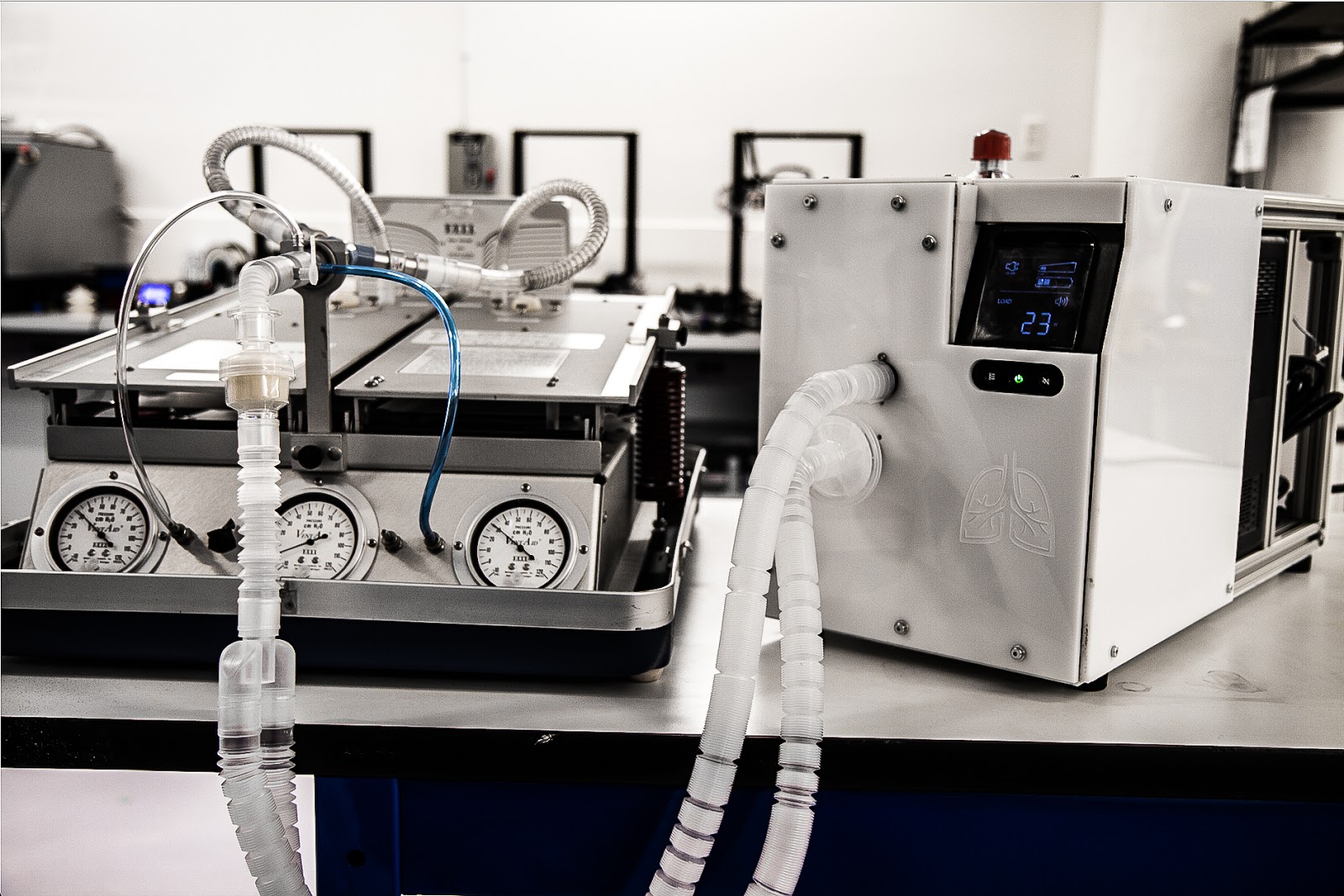 With the internal hardware solidified, it truly became time for the engineering and design team to begin considering the functionality of the ventilator within hospitals, including its overall aesthetic and interface flexibility within those environments. AIRA needed an exterior that was both practical but could also be visually appealing, which led the team to work with industrial engineers who designed the model which excellently communicated the simplicity but practicality of the ventilator itself.

Stage 5 also presented the ability of this model to use computational techniques to model fluid dynamics, which optimized long-term airflow of the ventilator.

Perhaps one of the most important details of this stage was that the AIRA now possessed an interface tablet which displayed important information and making it easier to interact with from the viewpoint of medical professionals and engineers alike. 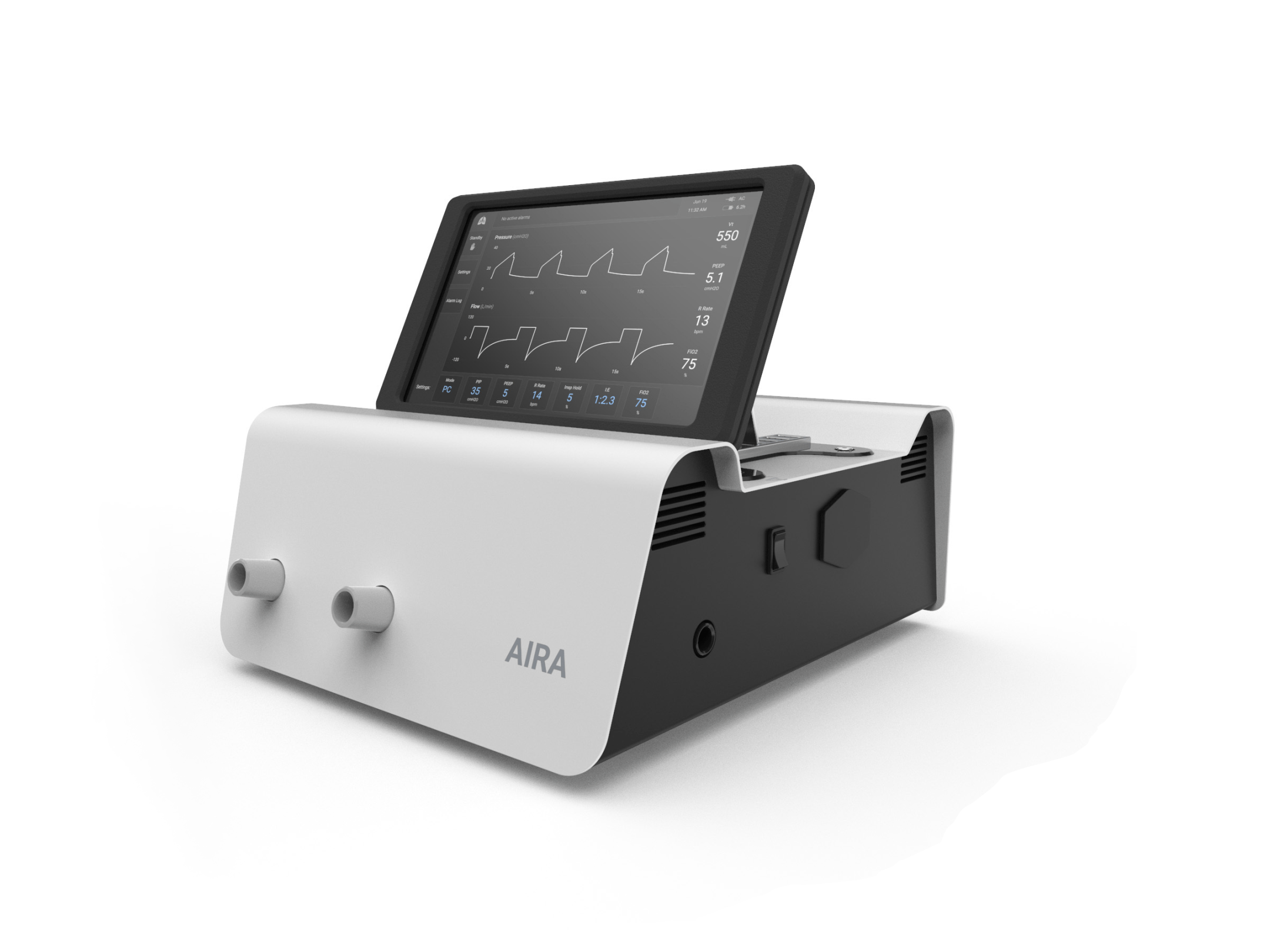 The Ventilator Project still had work to do: enter Stage 6. They soon realized that in addition to improvements to the ventilator’s overall functionality, its size could also be dramatically reduced. After some rigorous work by the engineering team, the size of AIRA was actually reduced by an impressive 30%, greatly reducing the space necessary to house the ventilator in medical environments where it would be used. Of greater importance was the feat of the engineering team in developing our own mass flow sensor, a device used in machinery to detect the rate of airflow entering a system.

Version 6.2 incorporates these advancements with the industrial design specs produced as conceptual models and finalized into one final piece, pleasing in both functionality and visual appeal. Great strides were made with the inspiratory and exploratory values, such as the integration of the exploratory system into one part. Flow regulators were also optimized in this stage, making it the most efficient seen by the engineering team at The Ventilator Project to date.

What about functionality? The Ventilator Project needed to fully understand the issues with modern ventilators from a full-circle perspective to create the best model thus far. TVP’s product management team spent time seeking to understand the frustrations and goals of respiratory therapists working with patients so that technologies could be better customized to meet those needs.

The concerns therapists brought to the team’s attention included confusing control systems and immovable machinery, in addition to storage challenges. Some of the more productive modifications made to this iteration as a result of this feedback was a stackable design to simplify storage in hospitals. Additionally, the unit size successfully decreased every iteration, considering the needs of transportation and storage for medical environments.

What made the design process for this iteration so truly fascinating is the fact that multiple members of the respiratory care team were considered in its development. Whether operated by ICU doctors to nurses and therapists themselves, the unit was constructed to be as versatile as possible.

Needless to say, the evolution of AIRA has been a tedious but continuously productive process. From engineering to product management, many hands contributed to the iterative development of AIRA from its meek beginnings to the streamlined, polished unit seen today.

However, just because the latest iteration of AIRA has been developed, this doesn’t mean The Ventilator Project’s fight to bring a low-cost, rapidly producible ventilator out into the world is over yet. There is still much work to be done, and a large part of that comes down to our donors. Quite literally every dollar moves us forward, whether it be to propel TVP through FDA authorization, or to simply buy snacks to keep our hardworking team of engineers well-fueled.

We need your help. If you’re able to contribute there’s no better time to do it than now. Your contribution greatly aids not just what we’re doing here at The Ventilator Project, but also all those who we seek to impact.

Want to stay up to date on our progress?